Just adjust your idea of "fine". 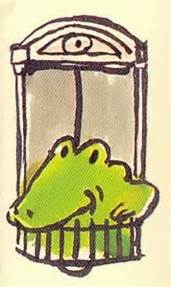 I’m a crier. Always have been.

My father had been parenting boys for thirteen years by the time I was born, so I think he thought that he knew what he was doing. My brothers are pragmatic, infuriatingly mature, and logical. They don’t make emotion-based decisions or cry at pictures of sad-looking dogs.

When faced with a problem, my brothers would analyze and attack, solving the problem in the most efficient way possible.

I would have a good cry and then write about it in my dream journal.

My dad, though he had hoped and wished and prayed for a girl, had no idea what to do with the crying, so he just told me to stop. For the longest time, years after his death, I felt really guilty about it, because I thought it was the crying that made my dad angry. Now that I’m an adult, and have had a lot of therapy, I realize that he wasn’t mad at all. He just didn’t know what to do. He wanted to fix whatever problem was making me cry, but when there was objectively no problem, just sadness brought on by a vague mention of someone in a book whose grandmother died, he couldn’t fix it.

I cried at the normal sad things that bring children to tears: falling down, slamming a finger in a car door, losing a pet, finding out in the last chapter that Charlotte FREAKING DIES. But it wasn’t just that. I cried about things that other kids never even considered crying about.

I cried when Lyle Lyle Crocodile was thrown into the zoo just for frightening Mr. Grumps’s cat. I cried when a character on television cried. I cried when we had fire drills. I cried when we had a substitute teacher because I knew that meant that my real teacher was sick and I was afraid she would never get better and her dog would be left all alone with no one to take care of him.

My teachers, likewise, were bewildered.

I will never forget (or, let’s be honest, forgive) a teacher’s aide who dragged me into the hallway in first grade. I had started crying because we were watching a film about polar bears, and a baby polar bear was on an ice floe and was crying because he was separated from his mother. I love my mother fiercely, and if I could have, would never have left her side. That baby polar bear probably felt the same way about his mother, I thought, and the idea of the sadness he must have felt dissolved me. The teacher’s aide stood next to me and said, loud enough for everyone to hear, “You better stop crying. I don’t deal with little girls who cry.” This, of course, made me cry even harder, because children can feel humiliation the same way adults can. She took my arm and marched me into the hallway and said, “Stop that. Stop those crocodile tears, there’s nothing wrong with you.” She made me sit in the hallway until I stopped what had become sobbing, which I absolutely could not do. The kindergartners processed by me on their way to the cafeteria, staring and asking each other, “What’s wrong with her?”  The worst thing was that I didn’t know. What WAS wrong with me? No one else cried about the baby polar bear. No one else cried because the cafeteria was too noisy and the kid sitting across from them pulled the cheese off his pizza and held up the saucy, bumpy rectangle crust and said was a piece of Freddy Krueger’s face. No one else cried because the girl on the schoolbus safety filmstrip broke her glasses. Just me.

Everyone thought I was just being dramatic. I was accused of just doing it for attention, as though kind of attention I got for being a “crybaby” was the kind of attention I wanted. Everyone seemed to come to the same consensus: I needed to grow up. I needed to stop letting things bother me. I needed to figure out a way to stop making everyone so damn uncomfortable all the time. No matter how hard I tried, the tears would start pricking my eyes, and a lump would rise up in my throat, and my lips would tremble, and then there I was again, making people roll their eyes and send me to the hallway. Every time I heard, “Stop crying,” I tried to say, “DON’T YOU THINK I WOULD IF I COULD, YOU HEARTLESS BITCH,” but I lacked the gumption.

Growing up didn’t stop the tears. If anything, I actually cry even more now, because there are more things to cry about. I can’t read Lyle Lyle Crocodile to my children because it is just too damn sad. I can’t watch The Lion King (or, really, any Disney movie) without a box of tissues. I can’t watch news coverage, listen to This American Life, or gaze reflectively at my children for too long without tears rolling down my cheeks and dripping off my chin.

The one thing that has changed, however, is the way I feel about it.

Now, with the help of a therapist and an understanding husband (who, for the record, also tears up when we’re standing on Main Street, USA in the Magic Kingdom, each of us holding one of our sleepy children, and  see Tinkerbell fly from the top of Cinderella’s castle) and the benefit of self-awareness you can only gain with age, I realize that I’m not weak. I’m not weak at all.

My feelings are close to the surface. I have an extraordinary ability to empathize with other people’s situations and feelings. That quality, which is what makes my emotional reactions so strong and real and undeniable and inconvenient, is also what makes me The Best Friend You Will Ever Have. You’re mad at somebody? Then I am too. You’re sad? I’m going to cry with you. You’re happy? Then so am I.

As a mother, I’m less apt to be frustrated with my children for having feelings that seem, on the surface, unreasonable. You’ve seen the “reasons my kid is crying” photos that are meant all in good fun? Yeah, they make me want to cry, too. If you’re sad, then you’re sad. The fact that someone else doesn’t think your reason is good enough doesn’t change the fact that you’re sad.

As a human being, I’m more tolerant of worldviews that don’t coincide with mine. I might not agree or approve of them, but I’m not the person saying, “I can’t imagine what would make a person do that,” because I can. I can imagine what would make a person do that. Does it mean that I think atrocities are justified? Absolutely not. But I can see the process, how one thing triggered another, that set off an alarm, that changed a thought, that made that person do something unthinkable. Because nothing, really, is unthinkable. If it happens, it’s thinkable. It may be horrifying, it may be callous and cruel, it may keep us awake at night trying to imagine what happened to a person to make him capable of something that monstrous,  but it did, so it’s thinkable.

No one has ever had to tell me, “Think about how that person must feel,” because I don’t have to think about it. I already feel that way.

There’s no point in telling someone not to be sad. If they’re sad, they’re sad, even if you don’t think their reason is good enough. A feeling is just a feeling, and you just have to let it be what it is: neither good or bad, just there, existing for what it is.  Will you get over being sad? Sure, when you’re ready. But what I have learned is that trying to reason the sadness out of someone only layers guilt on top of the sadness. Let a sad person be sad. When they’re done, they won’t be sad anymore. The only person who can make that decision, who can come through the other side of sadness, is the actual sad person. As much as you want to help, as much as you want to take the sadness away, you can’t. No matter how much you want to fix it, you can’t. Your powers as a Person of Emotional Fortitude are not strong enough to hasten the grieving process in another human being. Just hand over tissues, supply the pancakes, and say, “I hate that you’re going through this. I wish there was something I could do.” Sad people don’t want you to fix it. We want you to love us so much that you wish you could fix it, while acknowledging that you cannot.

Whenever I hear anyone say, “I guess I’m just being too sensitive,” I want to take that person firmly by the shoulders, look directly into their eyes, and say, “No, you’re not. You are being exactly as sensitive as you’re supposed to be. Don’t apologize for your feelings. Your feelings are your feelings, and you’re allowed to feel them. This is me, granting you official permission to feel whatever the hell you want to feel without the additional layer of guilt you have been taught is appropriate.”

I am not weak. If anything, I have X-Men super powers. I have empathy strong enough to kind of see where just about anybody is coming from. It makes me a better friend, a better leader, a better wife, and a better mother. If it’s what made me a weird kid, then it’s what has made me a great adult.

I didn’t know that empathetic was a good thing to be. I don’t think I ever even heard the word before I was in high school. I learned that Eli Whitney invented the cotton gin, how to do long division, and how to identify a topic sentence, but I didn’t learn anything about feelings, or why mine were so much closer to the surface than anyone else’s. I didn’t know that it was a gift, and that someday, I would be grateful for the way my chemicals were arranged. I never thought it would ever be something anyone would celebrate or find useful. It was weird and off-putting and it frustrated my father and my teachers and my friends.

When my daughter cries, I pick her up instead of teasing her. I hold her close, I smell her hair, and I say softly, “It’s okay.” When I say those words, I don’t mean that she’s okay, that the thing that has made her sad isn’t a thing she should be sad about, that her whole world is okay and that she has no reason to be sad.

I've taught my dog to gently take a piece of cheese from my mouth, so I guess you could say I'm a successful adult.

6 thoughts on “Feeling the Feelings.”